Time and again, the true story of Bob Fletcher goes viral. Fletcher, a white farmer, took care of multiple Japanese American farms in Florin, California, during World War II, paying down mortgages and taxes until he could return the properties to his neighbors.

Fletcher’s actions were unique in an era of rampant anti-Japanese racism, said Densho’s communications and public engagement director, Natasha Varner. But, she added, “It’s curious to me that his is the story that gets so much attention.”

“The link to Bob Fletcher’s story was literally the only part that cast white people in any kind of positive light,” Varner said of the Twitter thread. “So it’s a very literal example of how people tend to cherry-pick the parts of history that allow them to uphold this white savior narrative.”

It’s no wonder historians are preoccupied about what we choose to remember and celebrate these days. In a time of bleak historical comparisons, those feel-good anecdotes — usually starring white people — go down easier than takeaways about greed and white supremacy enabling the mass deprivation of Japanese Americans’ rights during World War II.

It’s not just that, though. Even when you look at the few bright spots in the story of Japanese American incarceration, the contributions of people of color get erased.

There are stories of people of all races who stepped up to help their Japanese American neighbors during the war. Ken Mochizuki, a Japanese American author currently at work on a graphic novel about “friends and helpers” who aided Japanese Americans during World War II, has identified 20 examples to include in his book, including black peace activist Daisy Tibbs Dawson and members of the Muckleshoot Indian Tribe in Washington state.

“One common denominator of all these so-called helpers was they had personal contact with the Japanese Americans,” Mochizuki explained. “Although they placed their own careers and reputations on the line, it was the personal contact that led them to do what they did. They knew them as people, real living people.” 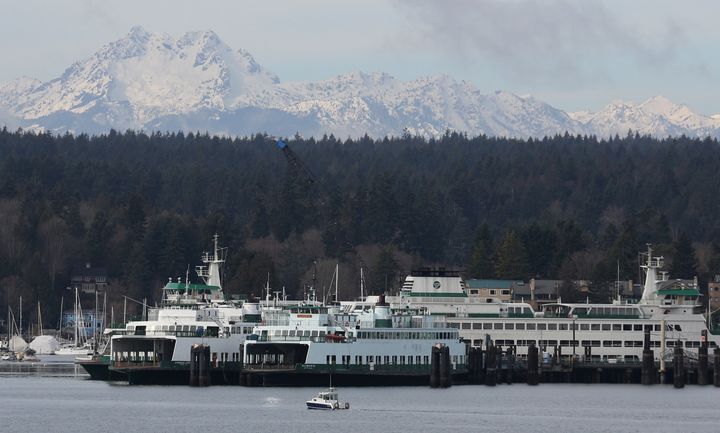 Chris Helgren / Reuters Ferries dock at Bainbridge Island, Washington, with the Olympic Mountains in the background.

On Bainbridge Island in Washington state — where the first Japanese American community was removed in its entirety from the West Coast and put in prison camps in 1942 — that seems to be precisely the case. The bonds between many Filipino and Japanese immigrants led a number of Filipinos to take care of Japanese American properties during World War II, as did some islanders of other ethnicities.

Filipino immigrant Felix Narte formed an especially close relationship with his Japanese American neighbors, the Kitamotos, working on their strawberry farm before the war. When the Kitamotos were suddenly forced to leave, Narte and other Filipino men took care of their abandoned properties.

Narte did even more than that, though. Lilly Kitamoto Kodama, 84, told HuffPost that he once drove all the way from Bainbridge Island to Idaho to visit her family in Minidoka, where they were imprisoned. “My youngest sister was only 9 months old and all the mothers in camp were washing diapers by hand, and Felix drove a washing machine to camp — my mother’s washing machine that was one of those electric ones,” she recalled.

“What a situation that was,” the 69-year-old added, reflecting on what his neighbors had endured.

ASSOCIATED PRESS Lilly Kitamoto, far right, holds a doll and a toy tractor next to her mother, siblings and a member of the U.S. military as her family is forced to leave Bainbridge Island on March 30, 1942.

Felix Narte took care of the Kitamotos’ house and property until 1945 — when the family could finally start their lives over. Because of Narte, their own familiar house and fields were still waiting for them when they returned.

The vast majority of Japanese Americans weren’t so lucky. In some cases, incarcerees released with little more than $25 from the U.S. government and a bus ticket endured campaigns of terror to keep them from reclaiming their homes and land. Many Japanese Americans returned to ransacked and vandalized property and desecrated cemeteries, and others felt so unwelcome that they never went back.

“My father heard all these terrible stories of how people were greeted when they came back to Seattle,” Kodama recalled, explaining that her father made a special trip back to Bainbridge Island alone to make sure it was safe for them to return. Their Bainbridge neighbors, eagerly awaiting them, “were upset he didn’t bring us all back home,” she said.

Not long after, her father and Narte drove back to Idaho and picked everyone up in the Kitamotos’ “big black Buick,” she remembered.

“My parents were so grateful with how well the place was kept up and everything,” Kodama said. “They gave him part of our property, and Felix had a house built on the property.”

We were welcomed back as a whole, and in other communities, people weren’t. Lilly Kodama, 84

Some people contrasted that relative harmony on Bainbridge with nearby Seattle, a city with a history of racist violence and expulsion. Redlining and racial covenants made Seattle a segregated city that remains so to this day.

“Bainbridge Island was different in that they were all integrated together and were neighbors from the start, unlike Seattle, where you had a separate Nihonmachi, Japantown, where people were kind of segregated,” Mochizuki told HuffPost. “Which is why on Bainbridge Island, you probably heard a lot of non-Japanese neighbors helped out. Personal contact makes all the difference.”

Yet race relations on the island were still far from perfect.

Colleen Almojuela, 75, the daughter of a Filipino father and a First Nations mother from Canada, described the discrimination her mother faced as a Native woman, and her own complicated memories of her Bainbridge peers accepting her for being a cheerleader “even though” she was Indopino. Islander Doreen Rapada told Densho in 2007 about a mob beating her father’s friend to death on Seattle’s Pier 60 as the two men were returning from a union meeting of Filipino cannery workers.

One white islander, Lambert Schuyler, organized a meeting to discuss preventing Japanese Americans from returning after the war. Some 200 people attended, but Walt and Milly Woodward, the white publishers of the Bainbridge Review who spoke out against the incarceration of Japanese Americans, reported that only about a dozen returned for the next meeting.

Almojuela recalled hearing a story about a Filipino farmer who saw people of Japanese descent as the enemy and “made sure to let them know.” Later, she said, he had a change of heart. When his Japanese American neighbors came back after the war, “he went to whoever the family was, and he had this thing under his arm, and they got really nervous,” Almojuela recounted. “It ended up to be a salmon.”

“In a way, it’s a Bainbridge Island story, in that people weren’t so quick to judge Japanese on the island,” Kodama said. “For instance, we were welcomed back as a whole, and in other communities, people weren’t.”

Today, the story of Bainbridge Island’s Japanese Americans during World War II is seared into the memory of the island, commemorated and memorialized, as it needs to be. But threads connect that injustice to others: Almojuela’s conflict over being accepted when other Indopino children weren’t. The friend of Rapada’s father murdered by a mob. It’s all part of the story of America.

“I suppose we need … feel-good stories in order to be inspired to do the right thing and to not lose faith in humanity,” Densho’s Varner said. “But as a historian and an activist, I really urge people not to stop there. The much more challenging and necessary work requires us — and I’m especially talking to other white people here — to take a hard look at the ugly parts of our history and to figure out how we might be upholding or replicating those patterns in our own lives.”

“At times of war, there’s so much manufactured fear,” Kodama said. “It’s going on today. They’re manufacturing fear to make people afraid of other religions or ethnicities.”

Trump administration officials have invoked the incarceration of Japanese Americans to argue for a Muslim registry. They’ve made plans to detain migrant children a stone’s throw from the sites where Japanese American children like Kodama were imprisoned eight decades earlier. Hate crimes are skyrocketing.

“During WWII, a lot of people were complicit just through their silence and inaction,” Varner noted. “As similar atrocities are happening around us, what are we doing to break that pattern?”

It’s seemingly easy enough to be kind, friendly, a considerate neighbor. But sometimes, the times demand so much more.